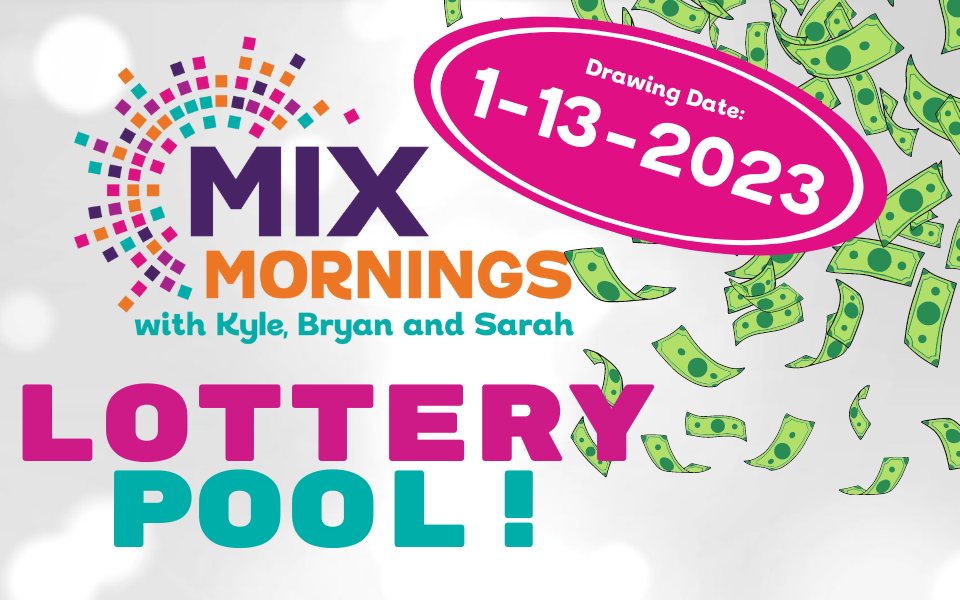 NO PURCHASE NECESSARY TO ENTER OR WIN. A PURCHASE OR PAYMENT OF ANY KIND WILL NOT INCREASE YOUR CHANCES OF WINNING.

OPEN TO PERMANENT U.S. RESIDENTS WHO ARE AT LEAST 18 YEARS OLD. VOID WHERE PROHIBITED OR RESTRICTED BY LAW. ALL FEDERAL, STATE AND LOCAL REGULATIONS APPLY.

HOW TO ENTER. Entries will be accepted between 7:00 a.m. on Friday, January 13, 2023, and 8:00 a.m. on Friday, January 13, 2023, (the “Promotion Period”). Sponsor’s computer is the official time-keeping device for the Promotion. Any entry received outside of the Promotion Period will not be counted. Only one entry per household, multiple entries will not be valid. Any entry that is deemed fraudulent or violates the Official Rules will be removed, and the entrant disqualified.

SPONSOR. The sponsor of this promotion is WRAL-FM, LLC d/b/a MIX 101.5 and Capitol Broadcasting Company, Inc. (“Sponsor”). This promotion is not sponsored, endorsed, administered by, or associated with Apple or Facebook.

ELIGIBILITY. The promotion is open only to permanent U.S. residents 18 years of age as of Monday, January 9, 2023, and who reside in the WRAL-FM total service area (TSA), as defined by Arbitron. Employees of Sponsor and its respective parent companies, subsidiaries, affiliates, officers, directors, agents, employees, advertising and promotion agencies and members of their immediate families (spouses, parents, children, and siblings and their spouses) are not eligible. Persons who have won a prize valued over $1 in any promotion sponsored by Sponsor in the last 30 days are not eligible to win this promotion.  Only one (1) entry per household is permitted for the entire Promotion Period. Additional entries from the same household will be eliminated. By submitting an entry to this promotion, the entrant acknowledges and agrees to (a) these Official Rules; and (b) to be bound by all decisions of Sponsor, whose decisions are binding and final. Winning a prize is contingent upon fulfilling all requirements set forth in the Official Rules.

PRIZE(S) AND ODDS. One hundred (100) participants will be chosen at random from all eligible comments made on the “MIX Mornings Lottery Pool” Facebook post on Friday, January 13, 2023, after 8:01 a.m. Participants will be notified when the MIX Mornings Facebook Page replies to Participant’s comment on the original post. The 100 participants chosen will qualify for a chance to split any net winnings from a winning ticket or tickets from the Friday, January 13, 2023, Mega Millions drawing, so long as the total winnings exceed one hundred ($100) dollars. To be clear, no money will be distributed if the winnings are less than one hundred ($100) dollars. Mega Millions lottery tickets will be purchased by MIX 101.5 WRAL-FM. Once all participants are selected, the 100 tickets will be posted on the MIX Mornings with Kyle, Bryan and Sarah Facebook page (https://www.facebook.com/MIXMornings/). Prize is non-transferable and no substitution will be made except as provided herein at the Sponsor’s sole discretion.  The number of eligible entries received during the Promotion Period will determine the odds of qualifying for the prize. Winner is responsible for all taxes, fees and expenses associated with the receipt of the prize.

PRIZE REDEMPTION AND RELEASE. The winners will be notified by a Facebook private message to the account used at the time of entry or by contact information given at the time of entry for the online portion and then instructed regarding how to claim and obtain the prize. Winners are responsible for all taxes and fees associated with the receipt and/or use of the prize. Winners will be required to sign and return to WRAL-FM an affidavit of eligibility and liability and publicity release within five (5) days of notification, as well as an IRS form W-9: Request for Taxpayer Identification Number and Certification for any prize over $600.00 in total value. If any prize notification is undeliverable, or in the event of non-compliance with any of these requirements, the prize will be forfeited. No substitution of prizes or transfer of prizes to a third party is permitted. By entering this promotion, entrants agree to release and hold harmless Sponsor, its prize suppliers, affiliates, subsidiaries, and each of such company’s officers, directors, employees, and agents (collectively, the “Released Parties”) from and against any claim or cause of action, including, but not limited to, personal injury, death, or damage to or loss of property, arising out of participation in this promotion or receipt or use or misuse of any prize.

PUBLICITY. Except where prohibited, participation in this promotion constitutes a winner’s consent to Sponsor’s and its agents’ use of winner’s name, likeness, photograph, voice, opinions and/or hometown and state for promotional purposes in any media, worldwide, without further payment or consideration

LIMITATIONS OF LIABILITY. By participating in the Promotion, you agree to release and hold harmless the Released Parties from and against any claim or cause of action arising out of participation in the Promotions or receipt or use of any prize including but not limited to: (1) any incorrect or inaccurate information, whether caused by entrants, printing errors or by any of the equipment or programming associated with or utilized in the promotion; (2) unauthorized human intervention in any part of the entry process or the promotion; including the comment process (3) technical, printing or human error which may occur in the administration of the promotion or the processing of entries; or (4) any injury or damage to persons or property which may be caused, directly or indirectly, in whole or in part, from entrant’s participation in the promotion or receipt or use or misuse of any prize.

PRIVACY.  Any personal information you submit as part of the Promotion will be treated in accordance with Sponsor’s policies which can be found here: https://wralfm.com/privacy-policy/.

DISPUTES. Except where prohibited, entrant agrees that:  (1) any and all disputes, claims and causes of action arising out of or connected with this promotion or any prize awarded shall be resolved individually, without resort to any form of class action, and exclusively by the United States District Court for the Eastern District of North Carolina or the appropriate North Carolina State Court located in Wake County, North Carolina; (2) any and all claims, judgments and awards shall be limited to actual out-of-pocket costs incurred, including costs associated with entering this promotion, but in no event attorneys’ fees; and (3) under no circumstances will entrant be permitted to obtain awards for, and entrant hereby waives all rights to claim, indirect, punitive, incidental and consequential damages and any other damages, other than for actual out-of-pocket expenses, and any and all rights to have damages multiplied or otherwise increased.  All issues and questions concerning the construction, validity, interpretation and enforceability of these Official Rules, or the rights and obligations of the entrant and Sponsor in connection with the promotion, shall be governed by, and construed in accordance with, the laws of the State of North Carolina without giving effect to any choice of law or conflict of law rules (whether of the State of North Carolina or any other jurisdiction), which would cause the application of the laws of any jurisdiction other than the State of North Carolina.

WINNER LIST. Winner list requests will only be accepted after the Promotion Period and no later than February 15, 2023.  For a copy of the winners list, send an email with subject line “MIX Mornings Lottery Pool: Drawing on January 13, 2023” to contests@wralfm.com.